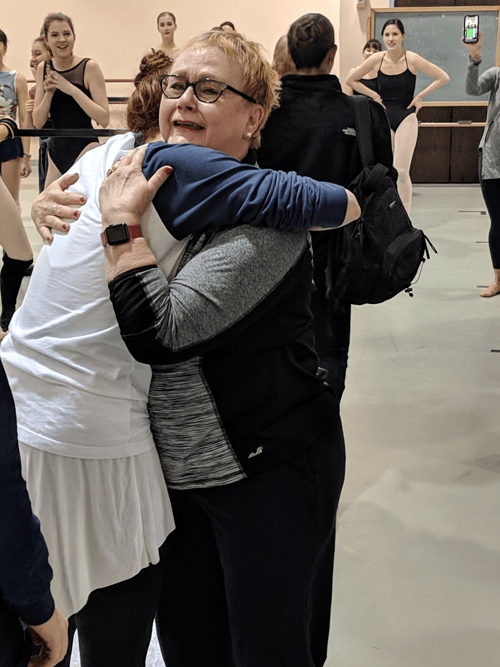 When word got out that Mercyhurst Dance Chair Tauna Hunter was ready to retire, many of her former students had the same thought: “Wouldn’t it be great to take just one more ballet class with Tauna?”

So Andrea Hashim Hansen ’04 organized a group of her fellow alumni to make that happen. On Friday, Jan. 18, about two dozen Mercyhurst dance graduates filed into the danceSpace studio just as Hunter’s class started. “Her surprise and jubilation as her alumni walked through the door, ready to dance, was so special,” Hansen recalled.

Once Hunter recovered from the shock, the alums (who had graduated between 1997 and 2018) got one more coaching session from their beloved mentor.

The alums had managed to keep their plans a complete secret from Hunter, enlisting help from C. Noelle Partusch, who has succeeded Hunter as dance chair, and Hunter’s husband Michael Gleason, who also taught many of these students.

Even more alumni arrived on Saturday to enjoy brunch in the Grotto Dining Room, tours of the growing campus, and a cocktail reception and dinner in Hunter’s honor on the stage of the Mary D’Angelo Performing Arts Center (PAC).

Alumni who hadn’t been able to make the trip watched livestreams of the Erie events and filled social media with tributes to Hunter throughout the weekend. Many of the dance grads have contributed scholarship funds in Hunter’s honor.

In other tributes, the Mercyhurst Board of Trustees voted at its February meeting to name the back studio of the danceSpace the Tauna Hunter Dance Studio, and technical director Andrew Ferguson dedicated a pair of seats in the PAC to Tauna Hunter and Michael Gleason.

Hunter hasn’t calculated the exact number of students she’s taught since arriving at Mercyhurst in 1994, but said she feels like she has more than 300 children. “The alums have gone so far beyond my expectations,” she said, noting that they include not only many successful dancers, teachers, choreographers, administrators and scholars, but also doctors, attorneys and even five Ph.D.’s.

She chaired the nationally known dance program for 24 years before stepping aside this year in anticipation of retirement. In what she called her “last hurrah” as a full-time employee, she and Gleason accompanied 14 dance majors to Mercyhurst’s campus in Dungarvan, Ireland, for the final eight weeks of her tenure.

Hunter earned both a BFA and an MFA in ballet performance and choreography from the University of Utah. She received critical acclaim as a leading ballerina with Ballet West, and toured with a variety of other regional companies. In addition, she and Gleason founded DANSOURCE, a national networking service that connected dancers with companies for more than 10 years.

Under her leadership, the Mercyhurst dance program has thrived, increasing from 30 to more than 75 majors; moving into state-of-the-art facilities in danceSpace and the Mary D’Angelo Performing Arts Center; and building a national reputation for pre-professional ballet training.

Erie Arts & Culture honored Hunter with a Lifetime Achievement Award last fall, recognizing her career and her contributions to the Erie community.
Hunter hopes to remain involved at Mercyhurst as an adjunct, staging works and choreographing. She’s also reaching out to those 300 children around the country to let them know she’s available to guest teach and choreograph. She rebooted Mercyhurst’s Summer Dance Experience in 2018 and hopes to continue growing the intensive program for talented dancers ages 12-23. And she’ll continue to serve on the boards of the National Association of Schools of Dance and of Erie Arts & Culture.

Hunter’s impact on her students clearly went far beyond the ballet technique they learned under her tutelage. A small sampling of the weekend’s tributes:

I find it difficult to find the words to express my deepest gratitude to Tauna for her leadership, support, and encouragement. YOU, Ms. Hunter, are the reason WE contribute to the field with unwavering passion. While Mercyhurst was a training ground, it stands as a symbol of how generations can be impacted and in-turn can then make an impact! – Andrea Hashim Hansen ‘04

My years at Mercyhurst provided me with the foundation to serve my community through dance To Tauna, for teaching me that some things are just ‘tu tu terrrific!’ I will always cherish my time at the Hurst and the wonderful art created there. Thank you for inviting me in and assisting me to finish my education and become a whole, educated person, in addition to a dancer. – Parris Hobbs ’05

From a clueless 18-year-old who did not know if she even wanted to keep attending ballet class, to a college experience nothing short of incredible, through a professional performance career no one believed my feet could have, and into a male-dominated world of orthopedic surgeons who wonder why I am the way I am, your guidance ties it all together. Your standard to continually produce the ‘exceptional and rare’ is embedded in my core. – Noelle Lelakus ’08

What Tauna put into developing her dancers went so far beyond the stage and I am forever grateful. Tauna, thank you so much for believing in all of us and seeing the strengths that we didn’t know we had. – Janet Strukely Dziak ’04

Forever thankful for the four years I spent at Mercyhurst learning from Tauna. Someone who truly shaped myself as a dancer, an artist, a teacher, an individual, a human being. – Lindsay Lundy ’06

One of the most important things Ms. Hunter taught us was the importance and significance of networking. In my three years post-grad, almost all of my opportunities in the dance field have come about from networking through Mercyhurst alums. We’re so blessed to have strong roots and a second ‘family’ to have near. – Maggie Sullivan ’16

You changed the life of so many with your love and wisdom. Thank you for teaching me so much more than steps. – Danielle Garcia ’17

My time with you and the faculty at Mercyhurst has shaped my path as a professional dancer, teacher, administrator, mother, friend, and advocate for the arts. Thank you for being such an influential mentor and leader for us all. – Kara Jones Louis ‘07

I was at the airport by 4:30 a.m. I took 3 planes and sprinted across two airports to make connecting flights, but it was so worth it be at my alma mater surrounded by so many other dance alumni to honor Tauna Hunter with a surprise retirement celebration. – Jolene Chase Parker ‘04